I live in an area where the closest repeater is about 5 miles away. although I could hear transmissions just fine, people would often not be able to hear my transmissions. Even with a rollup antenna for 2m use, my transmissions were sketchy and I could not communicate on 70cm.

So, I ordered a Tram 1480 Dual-Band antenna from the Home Depot for about $70 and suspended it, using paracord, a staple gun and 4 zip ties, inside my attic, attaching it top and bottom to the joists and running the coaxial cable to my shack.

Problem fixed! My transmissions are clear and strong - It works perfectly, and was easy to do! The most challenging part was dropping the cable to the basement, but I figured that out.

Here are a couple of photos of the antenna. 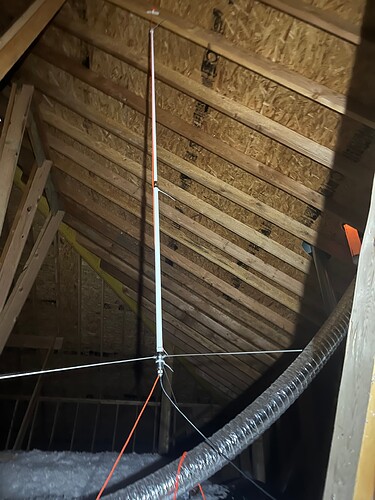 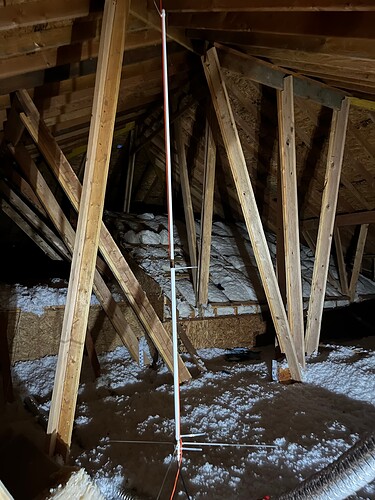 Awesome! If I ever get a desktop base-station I will have to remember to try something like this. But, I’m curious… is this install just for 2m/70cm frequencies? Or could other frequencies have similar antenna installs?

That’s a perfect setup. One of my crossband repeater antennas (the primary transmit side) is located in an attic with the other antenna mounted outside and it works just about how I want it to. Many hams use attic-mounted antennas to get around HOAs, or significant others who don’t want the metal on the outside of the house.

is this install just for 2m/70cm frequencies? Or could other frequencies have similar antenna installs?

I have run with a 10-15-20 Meter Fan Dipole in my attic at my old condo. I have also heard people have success with a loop. I think it’s only limited by size of the attic and imagination!

TBH, my first thought was, “why is it snowing in your attic?”

I didn’t know Home Depot sold antennas. I have similar install in my attic with a Diamond X 50

I learned it from watching a video. It works very well and was only about $70. I stapled paracord to the joist, then tied the cord around the antenna at a few places and stapled the cord to the floor joist, suspending the antenna above the ground. pretty slick.