I figured this would be a good project. I dont have any unused Pi’s laying around and they’re super hard to come by unless you want to pay 3-4x the actual price but I do have this really nice box that I used as a router and I was about to install Direwolf on on it but then realized, I would need a dedicated radio for this. That seems like a waste and virtually keying the Mic sounds problematic. This would be a perfect use for a little SDR stick but most of them are RX only. You don’t get TX until you get to like HackRF (with Ham it up) and at that point I wouldn’t want to wast a $300+ SDR kit on this either.

How do people pull this off? Wait until you’ve collected enough radios that it doesn’t matter?

My APRS digipeater is using a radio I won at the Orlando Hamfest as a door prize a few years ago. Adding weather to it might be fun. I used an SDR before that and I agree Direwolf is a great software program to use.

I have a couple of Pi 3’s I have taken out of service. If you are desperate for one and don’t mind used, drop me a private message here.

I’ve been researching, this might do the trick. Still the cost of a full radio but task specific and small enough that I could bundle the entire thing with a solar panel I think. The Pi, the transceiver, battery and the weather station all on one mast.

So here’s what I built. A Pi, a USB sound card, my Baofeng HT and the official mic cable. There are a lot of variations on this on the web. Here’s where I’m at.

Using a 2nd HT I can listen to my direwolf instance.

Direwolf sends out its own beacon (N6RJB-10) every 30 min. I can hear the packet go out on my 2nd HT. I can see this on aprs.fi as being picked up by another local digipeater.

I can see in the log, Direwolf is hearing lots of nearby APRS traffic

The problem I’m having is when direwolf repeats packets that it hears, I only hear a key up but no digital tone. Obviously nothing shows up on aprs.fi either.

I’ve checked the various software volumes, and I know it sends the test tones and it can send its own beacon just fine. I’m stumped why only the digipeater portion of direwolf has this problem. Has anyone run into this? The digipeater in the config file only has one default option and thats the DIGIPEAT line.

I have not enabled the internet gateway yet because I want to keep the testing isolated to RF for now.

This is what the log shows when its reporting, looks correct

but nothing but the buzz of an open mic comes out,

Ok, so it turns out that VOX is a terrible way to do APRS and it’s especially bad with Baofeng. I bought a SignaLink box and now it works perfectly!

(the pi case is still printing) 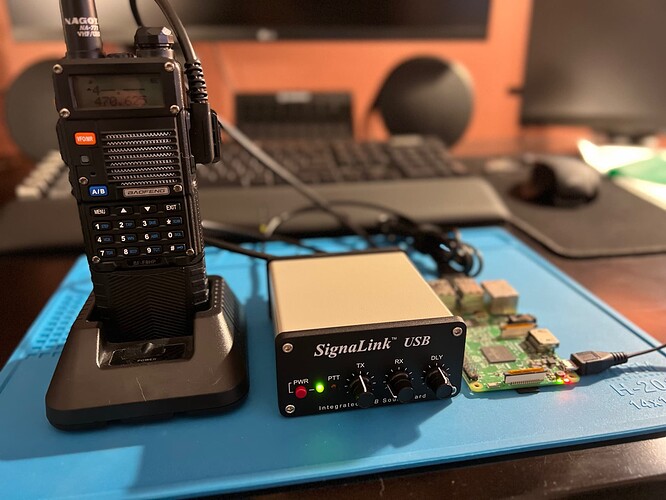 Next step is a solar panel, battery, and weatherproof enclosure so it is fully self-contained.

What components are you using that monitor/measure the weather?
A kit?